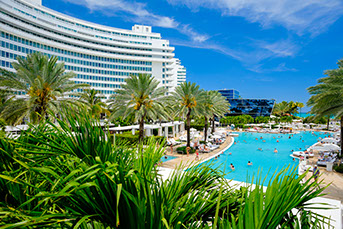 In 2005 Turnberry Associates acquired the iconic Fontainebleau Hotel in Miami Beach for $500 million. The company, owned by the Soffer family of Miami, subsequently invested an additional $500 million to renovate the hotel and add new facilities. The investment was funded in part by a group of 18 international banks led by Bank of America. In 2007, Nakheel Hotels, the real estate arm of Dubai World formed a joint venture with the Soffers and purchased a 50% stake in the hotel for $375 million.

The new Fontainebleau was officially launched in November 2008 with a much heralded Victoria's Secret Fashion Show. The new owners had carefully crafted a cutting edge hotel to compete with the best of the so-called boutique hotels in South Beach. The 1500 room hotel is considerably larger than its peer group and has a number of unique features that set it apart from its competition: most notably LIV, the 1000 person night club that the New York Times subsequently rated as the second hottest night club in the U.S.; three signature restaurants --- Gotham Steak from New York, Hakkasan from London and Scarpetta from New York; extensive meeting/convention facilities that have become a very popular meeting destination for corporate retreats, sales meetings and trade exhibitions.

The hotel began to face serious financial problems shortly after opening. Cash flow from operations ran considerably behind budget in early 2009. The hotel's food and beverages facilities were still not fully functional and both group and transient business was clearly affected by the severe economic downturn. In April, 2009, the hotel entered into a forbearance agreement with the bank group and retained investment bankers to initiate negotiations to restructure $850 million of debt. The hotel continued to pay interest through the second quarter of 2009 and then defaulted on Q3 interest payments. Bankruptcy counsel was retained in October.

In January 2010 the joint venture retained Quest, providing the services of Robert Schmitz as Chief Restructuring Officer. Quest focussed on settling $80 million in contractor claims, to control non-hotel operating cash, to oversee completion of construction activities and to assist in the bank restructuring.

In late April, the banks and the joint venture reached an agreement in principal to restructure the balance sheet. The senior bank group agreed to extend the term of their loan, holders of debt at two junior tranches settled at discounts of 50% and 65%. An investor holding a mezzanine financing obligation received no cash but a token amount of equity. The restructuring agreement was conditioned on settling a significant percentage of the outstanding claims subject to liens.

Quest settled 93% of the outstanding claims in a four month period subject to strict requirements imposed by the senior lending group. As a result of this consensual out of court settlement, the hotel was able to avoid bankruptcy and close on its agreement with its senior lenders to restructure the balance sheet on September 27, 2010.