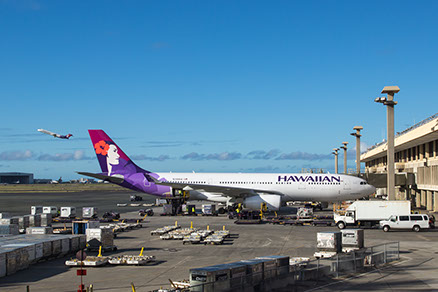 An investment group led by Peter Ueberroth acquired Hawaiian in August 1989. Following the acquisition, significant operating losses and deferred maintenance expenses caused an increase in bank debt to $137 million. In October 1990, the airline stopped rent payments on all aircraft leases. By 1993, unsecured creditors primarily aircraft lessors and their lenders were owed approximately $200 million.

Mr. Brodsky represented the interests of aircraft lessors of a majority of Hawaiian's fleet, participated as a member of the Unsecured Creditors Committee, and was elected a Director when Hawaiian exited from bankruptcy in 1994.

Immediately, Mr. Brodsky began work with management to implement a series of restructurings. In 1993, he spearheaded efforts to organize and create an Unofficial Committee of Unsecured Creditors that included representatives from all parties in interest. This Committee worked with Hawaiian, and its employees including representatives from the Pilots, Machinists and Flight Attendants unions to pursue a prepackaged Chapter 11. At the Committee's request, the Board replaced senior management with experienced airline personnel and the new team pursued a turnaround plan that focused on fleet standardization, expense reduction, route structure rationalization, and improved marketing and promotional efforts. In connection with Bank of America's acquisition of Security Pacific National Bank, it agreed to write-off the entire balance of Hawaiian's loan upon receipt of $18.6 million of proceeds from the state of Hawaii's condemnation sale of the Kapalua-West Maui Airport.

With the extinguishment of the senior debt, unsecured creditors owned approximately 70% of Hawaiian. Hawaiian filed for protection under Chapter 11 in September 1993. It emerged from bankruptcy in September 1994 under a "pot plan" that converted all debt to equity. To finance the peaks and valleys common in the airline industry and to avoid raising cash by selling tickets at deep discounts Hawaiian raised $20 million privately. Mr. Brodsky resigned from the Board in January 1996 when the private placement was completed. A year following the consummation of the plan, Hawaiian had a total market capitalization of $240 million.